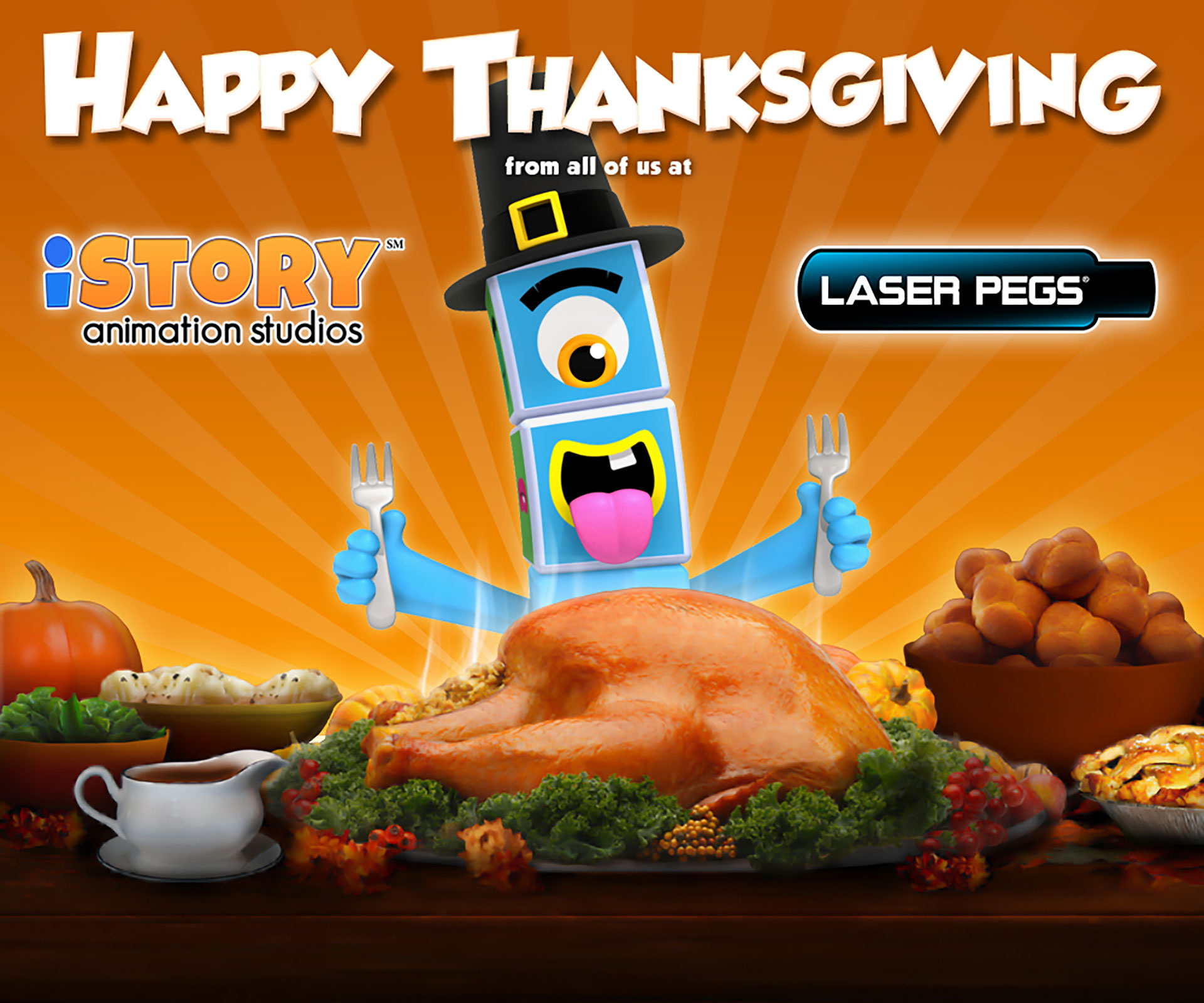 When a relentlessly expanding empire threatens to pave over the world in the dreary sameness of opaque building bricks, three courageous and crazy Peg Heads utilize an awesome array of laser-lighted vehicles to set the world aglow. 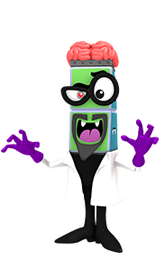 The Peg Heads is a no-holds-barred comedy-action series that brings the Laser Pegs toy line to life with unique and endearing characters who build and fly/drive/ride/sail colorful, glowing Laser Pegs vehicles and creatures. Our three heroes — ZIPPY, PEG & SPINNER — live on the island of New Pegland in the small town of Fruitville. From their underground headquarters — THE POWER CAVE — they are led by the brilliant but absent - minded scientist, PROFESSOR LASERUS, using Zippy's miraculous invention — THE POWER PEG — to light up their Laser Pegs vehicles and structures. 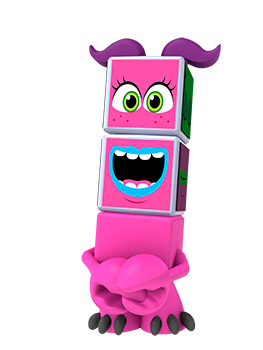 Peg is a DOER. She's a hyperactive extrovert. A bit of an airhead. She's the most creative of the trio. She likes flowers and colorful things. She is more emotional than the other Peg Heads, with comical mood swings. She could be all sweetness and light one moment, and if she doesn't get what she wants, her head spins to reveal her angry eyes and fangs! But she calms just as quickly, and despite this she's a real sweetheart. She is feminine but with edge. If she were to ride a Harley it would be pink with flames. If she danced ballet she would include Bruce Lee martial arts moves. She sees the good in people and things. 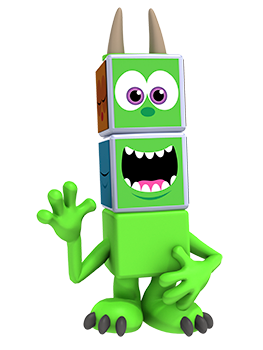 Zippy is a thoughtful, kind, know-it-all nerd with an IQ high enough to boil water. But he holds back his genius because he's overly cautious, too analytical, too calculated, too mathematical and too verbose. In contrast to his pals, Zippy is health conscious, cooks "scientifically" and is into fitness. But for all his do-good-ness he's nervous, startles easily, and is a self-conscious introvert. 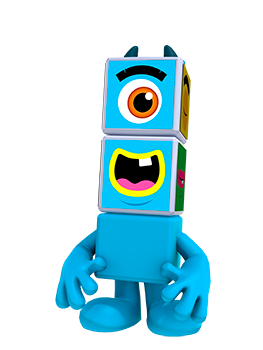 Spinner is a total goofball. He likes to shoot his head off by putting his thumb in his mouth and blowing. He's an off-the-wall crazy, funny, wild man. His IQ is as low as Zippy's is high, and the two of them are oil and water, like Abbot & Costello. Despite his low IQ, Spinner has unlimited self-confidence, and dreams that he could be anything he wants to be when he grows up, like a barber pole or a traffic signal. Spinner is extremely empathetic. He not only talks to plants, he talks to objects—like a garbage disposal, mousetrap or golf course sprinkler—and more often than not they talk back! 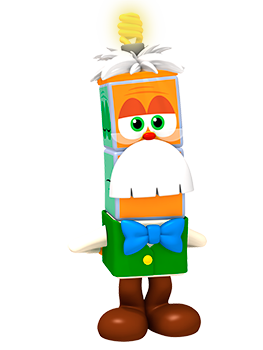 Professor Laserus (pronounced LAY-zer-us) is not only the inventor of the Power Peg—the miraculous gizmo that powers and lights all Laser Pegs vehicles—he is the founder of New Pegland and its benevolent leader. He is warm-hearted, soft-spoken and a bit absent-minded. He is the mentor of the Peg Heads. Professor Laserus recruited and "enlightened" the Peg Heads, who are like his children. He tutors Zippy on science and technology, gives Peg advice on personal matters, and reads bedtime stories to Spinner. But most of Professor Laserus' actions are guided toward defending New Pegland against Queen Brictoria's nefarious plots. 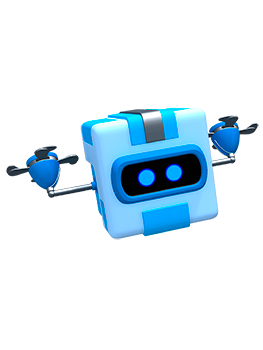 Drone is a floating, robotic cube about the size of a volley ball with a female voice. She was also invented by Professor Laserus, and is a state-of-the-art mobile computer drone. She is ubiquitous in the Peg Heads' world and her voice can come out of their watches, computers, dashboard navigators, etc. She can remotely control vehicles and eavesdrop on the baddies. Think of Drone as the Peg Heads' nanny. She's a mother figure to them even though they don't believe they need a nanny. 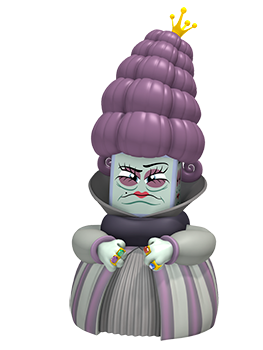 Queen Brictoria lives on Brictania in the Royal Palace of Brickminster. As Queen "Mother" she knows what's best for her "children" and what's best is opaqueness! But the bricks of Brictania aren't the only things that are opaque. Queen Brictoria's personality is just as opaque. She is a sourpuss through and through. She wears a lot of opaque makeup and plastic wigs to hide her bald head. She is paving over the world in opaque bricks and making mindless opaque people that go to bed on time and do their homework. 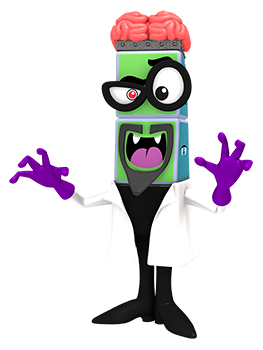 Dr. Frickenblock is Queen Brictoria's personal mad scientist and hairdresser. He wears the proverbial white lab coat, the proverbial thick glasses and the proverbial goatee. The only thing that isn't proverbial about him is the exposed brain on top of his head. Dr. Frickenblock develops dastardly vehicles, monsters and weapons of opaqueness in his drab opaque lab for his drab queen. His eyes are constantly going around in crazy circles and he draws out his words with maniacal intensity. 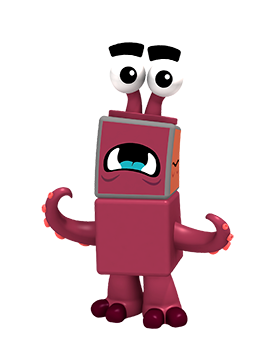 Lackey is the Queen's personal lackey and Dr. Frickenblock's personal Igor. He was created in an experiment gone bad when Dr. Frickenblock tried to turn him into a handsome movie star. Now he has eyes on eyestalks and tentacles instead of arms. Lackey is a "yes peg", and rarely talks back to his masters. He follows their orders, though often with terror because his orders are often suicide missions. Yet somehow he survives them. Lackey is crazy comic relief to the Queen and Frickenblock's staid comic relief. He often screws up Frickenblock's missions. But he's great at pedicures, so the Queen won't fire him.